High speed measurements can be used to reveal the evolution of turbulent combustion. Turbulence-chemistry interactions in flames can be studied as well as the dynamics of flame propagation. At the division of combustion physics in Lund we have two types of systems for high speed imaging.

One of the high repetition rate imaging system available at the division of Combustion physics consists of a solid state pumped Nd:YAG laser, a high repetition rate dye laser and a high speed image intensifier and CMOS camera. The repetition rate of the dye laser is limited to 20 kHz. The main advantage of this system is the large number of consecutive images that can be recorded. Instead of a maximum of eight, several thousands of images can be saved (only limited by the internal memory in the camera). Thus both fast and slow events can be captured in the same image sequence.

The dye laser, which is pumped by the Nd:YAG laser enables detection of different molecules as the wavelength can be tuned to match their transition energies. The laser is specially built to enable lasing at the relative low pulse energy and high power delivered by the high rep. rate Nd:YAG laser.

In Fig. 1 movie is shown of the OH radical distribution in a non-premixed flame. The movie is recorded at 2 kHz and only 200 of the 5000 recorded images are shown.

For relatively slow flow, it is possible to scan the sample with the laser sheet using oscillating mirrors. Fig 6 shows a series of 3D images of a nebulized water droplet flow with a nitrogen-jet central feature. For each 3D image 20 images at different depth positions, covering half the spray, have been recorded. With a frame rate of 20 kHz this gives a time resolution of 1 ms.

Figure 2. Time resolved 3D visualization of a nebulized water droplet flow with a nitrogen-jet central feature. Each image is constructed by 20 2D images of the light scattered by the droplets. The images are plotted at their corresponding positions with transparency inversely proportional to the signal level. An iso surface marks the border of the spray. The distance between the dotted lines corresponds to 5 mm. The movie is played at a frame rate of 10 images/s equivalent to 10 ms/s.

The second high repetition rate imaging system available at the division of combustion physics consists of a Multi-YAG laser system coupled with a high speed framing camera. The laser consist of four individual Nd:YAG lasers that are combined into one unit as seen in Fig. 1. Each laser can fire two laser pulses within a very short time interval thus producing eight laser pulses in a pulse train. The high speed framing camera consists of a camera lens and a single intensifier that collects the signal. The signal is then split into eight identical copies and imaged onto eight individual intensified CCD detectors. The combined imaging speed of this system is up to 100 MHz with pulse energies up to 1.4 J/pulse @ 532 nm but it is limited to eight laser pulses and images per pulse train.

The real advantage of the Multi-YAG system is its high pulse power combined with high repetition rate. It is for instance possible to make high-speed Laser-induced incandescence (LII) measurements among several other possible techniques. Figure 4 shows a movie of LII images captured during the injection event in a heavy-duty diesel engine. The images are separated 139 μs in time. The sketch to the right shows the orientation of the images and the laser sheet relative to the combustion chamber. 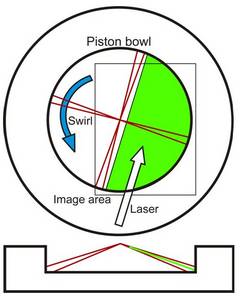 Figure 4. Left: Movie of LII images covering the injection event in a heavy-duty diesel engine. The circular sector marks the location of one of the fuel jets. Right: Sketch of the combustion chamber, bottom and side view. The green areas show the region that is covered by the laser and the red lines show the direction of the diesel jets. The square represents the area that is showed in the images. 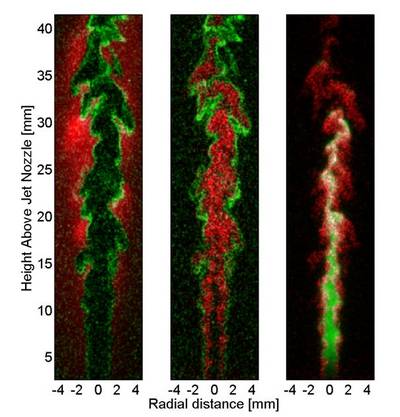 Another example of combining different techniques is seen in Fig. 6 where simultaneous time-resolved OH PLIF (color field) and PIV (vectors in second image) measurements have been combined to measure in a non-premixed flame. In this case PIV reveals the flow field and OH PLIF shows the evolution of the flame zone. A local extinction event can be seen in the OH images and the flow field from PIV shows the reason, a vortex that is impinging on the flame front.