Per Petersson and Marcus Aldén

Characterization of the flow field is very important in most combustion applications. Particle Image Velocimetry (PIV) is a non-intrusive optical technique to capture the spatial velocity distributions for a whole field simultaneously with high resolution. PIV measurements can be performed in combination with other optical measurement methods to increase the understanding of e.g. combustion phenomena and interaction between a flame and the flow field, Fig 1. Laser Doppler Velocimetry (LDV) is a compliment to PIV and is used for non-intrusive, time-resolved (kHz), point measure­ments of local fluid velocities and their fluctuations. 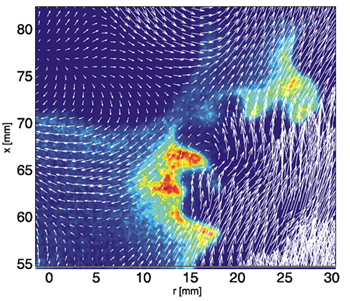 Figure 1. A combined PIV-image (flow field) and OH-LIF (Laser Induced Fluorescence) image in a combustion application. The background intensity corresponds to the concentration of the OH radical and indicates areas where combustion has occurred.

The working principle of a PIV system is simple and the velocity is determined from fundamental properties - displacement (of imaged particles) and time for the displacement, fig 2. Two laser pulses are expanded into a 2-D "sheet" by a cylindrical lens. The pulses illuminate fine seeding particles, following the flow, in the light sheet. The laser pulses are synchronized to a CCD camera so that each firing of the laser appears on a single CCD image frame. The time separation between the two images is set by the user and known with high accuracy. The displacement of the particle images is measured in the plane of the image and used to determine the displacement of the particles in the flow. The most common way of measuring displacement is to divide the image plane into small interrogation windows and cross-correlate the images from the two time exposures. By applying two cameras imaging the flow (particles) using different angles of detection, the particle movement not only in the plane of the laser sheet but also perpendicular to the laser sheet can be measured, so called stereo-PIV (see Fig 2). 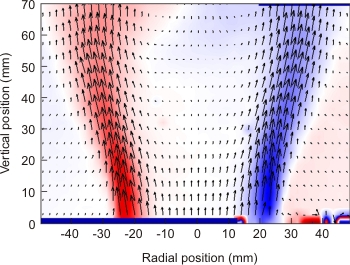 Figure 2. A 3-component PIV-image in a swirling flame. The background intensity corresponds to the out-of-plane component (swirl) whereas the black arrows indicate the flow field in the plane (axial and radial component).

The LDV technique is based on the detection of the frequency shift of laser light that has been scattered by small particles following the flow. The scattered light is frequency shifted according to the Doppler principle and the light contains information about the velocity of the particle from which the radiation was scattered.

The light source for most LDV applications is a low power argon-ion laser generating a mixed beam of green, blue, and violet colors which can each be used to measure one component of the velocity vector. The intersection of two laser beams from the same laser gives rise to an interference phenomenon as the light in the two beams cancel each other in some regions and comple­ment each other in other regions due to the coherent properties of laser light. A pattern of alternatively dark and bright planes called fringes can be seen if the point of the beam intersection is enlarged, see Fig. 3.

Figure 3. Fringe pattern generated by interference in the point of beam intersection.

A particle that passes through the measurement volume crosses the fringe pattern and scatters a periodic light flux, a burst. This modulated light flux is detected as a frequency fd in the receiving optics. The detected frequency is independent of the direction of the scattered light beams and is proportional to the particle velocity perpendicular to the fringes. The LDV system thus measures the velocity component perpendicular to the fringe planes. This velocity, called Vy here, is obtained by multiply­ing the fringe spacing, df, with the output frequency,  fd, which is the number of fringes traversed per unit time: