In many contexts, spatially resolved measurements is desirable. A typical approach for this is to send a thin laser sheet through the flame and study the induced signal from the side, using e.g. PLIF. This will then give a two-dimensional image. However, sometimes it is not possible to look from the side due to practical reasons. In these cases, the signal which is generated in the back-direction could be studied instead, also providing a two-dimensional image provided that a laser beam with a sufficiently large cross section is used. Unfortunately, this approach gives no depth resolution, but rather an integrated signal from the entire sample. This means that if there is a structure in the centre of the sample, it will be hidden or difficult to resolve properly because of the light originating from the regions behind and in front of the interesting region. To solve this problem, Structured Illumination (SI) can be used. This technique has been used for some time in microscopy applications. Figure 1 shows an example of a case with and without depth resolution and illustrates the importanceof having depth resolution in order to make the correct image analysis.

Figure 1. Example of the importance with depth resolution. The “star” is not clearly visible without this, since information in front of and behind the “star” ruins the image.

The principle of SI is to make light coming from a certain depth different from other light originating from elsewhere. This makes it possible to recognize light from this plane and therefore also possible to remove other unwanted light. To make the light in the desired plane different from other planes one can use a sinusoidal grating. By sending light through such a grating and imaging this into the sample, light which is reflected back from the in-focus plane of the sample will have lines in it, while out-of-focus planes will result in light without lines. Using mathematical methods, the images can be processed and the information retained.

In principle, SI can be used together with several laser-diagnostic techniques. Hitherto, studies has mainly involved scattering. Fig. 2 shows results from scattering measurements. The sample consists of a flow of water droplets. In the middle of this flow there is a second flow, in this case a flow of nitrogen. This example illustrates how it is impossible to see this inner flow when studying all back-reflected light, but when using SI, it is. This can be seen by comparing the second row with the bottom row, in which the inner flow is clearly visible. 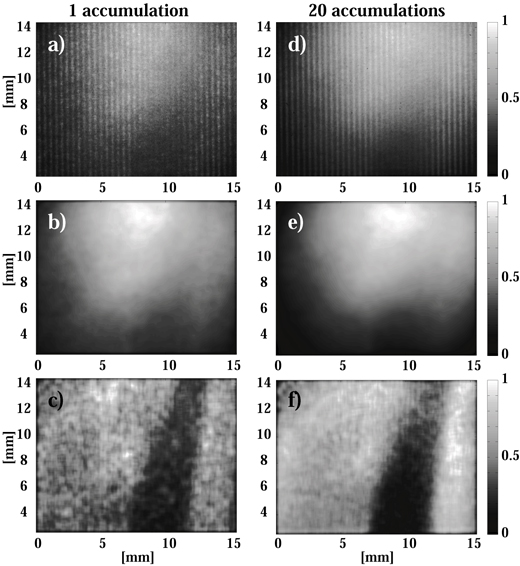 Figure 2. SI with the back-scattering configuration. In the top row, the lines from the in-focus plane is visible. In the second row, no inner structure is seen, while, in the bottom images, the nitrogen is clearly visible.

SI could also be used when looking from the side (compare with PLIF). Here, SI could be used to remove multiple scattering events, which almost has the same type of blurring effect on the resulting image. Now, light is formed into a laser-sheet, as described above, but now with lines in it. When light is multiply scattered within the sample, the line information is lost, while directly scattered light will keep this information. Using similar methods applied for the back-scattering case, it is possible to remove unwanted light which ruins the image.