Laser-induced fluorescence (LIF) is a highly sensitive resonant technique that can readily be employed for studying the distributions of minor species, down to sub-ppm levels, both qualitatively and quantitatively, and for measuring temperature fields and flame front propagation. At present LIF is one of the most widely utilized laser diagnostic techniques in the combustion area, and is by far the most utilized technique at the division.

Laser-induced fluorescence is a resonant technique. Thus, the laser wavelength is chosen to match the transition of a target species, usually from one electronic state to another but sometimes of one rotational-vibrational level to another. This is illustrated in Fig. 1. The target species is excited by a laser, the light which is emitted on the basis of the de-excitation process being termed fluorescence. Although the fluorescence produced may be resonant, so that the target emits the same wavelength as that which was absorbed, the rotational and vibrational levels in the ground state that are accessible can also differ, depending on the structure of the molecules and the selection rules that apply, leading to the wavelengths emitted being slightly different (usually longer) than those of the excitation source, as shown in Fig. 1. This wavelength shift makes the detection of the signal technically simpler, than for instance for Rayleigh scattering where the signal appear at the same wavelength as the laser. Interference or colour glass filters can be used to suppress the irradiating laser light. The absorbed and the emitted energies are unique to the target species in question, which can be chosen selectively, identified and information concerning both temperature and concentration extracted from them. 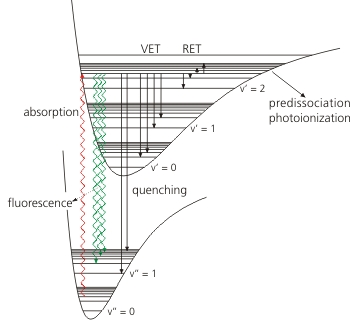 Unfortunately, just as with most diagnostic techniques in this area, LIF has certain inherent difficulties. The long lifetime of the fluorescence (typically on the order of tens of or even hundreds of nanoseconds) makes the signal very sensitive to collisions (typical collision times under atmospheric conditions are ~100 ps), which compete with the signal-generating process. This process termed quenching is what makes quantitative LIF difficult to obtain. Even at the pressure of 1 bar, the quenching rate for most radicals relevant to combustion can be 2-4 times the rate of spontaneous emission of a fluorescence photon. At elevated pressures, the collision times are diminished and can be on the order of only a few picoseconds.

There are a number of different approaches in dealing with quenching, involving either avoiding it entirely or measuring it. In predissociative LIF and ionization LIF, for example, loss terms can be increased to the point of making quenching negligible, but weakening the fluorescence signal dramatically. Saturated LIF, an approach in which a strong excitation laser is employed, is strongly affected by the energy transfer in the ground state, leaving the fluorescence signal largely independent of both quenching and laser irradiance. Use of short excitation pulses, such that the pulse duration is shorter than collision times typically are, is a further option, one that enables quenching-free measurements to be performed, yet the short pulses involved can introduce other problems, such as limited spectral resolution, through the linewidth of the laser being related to the pulse duration. The shorter the duration is, the broader the spectral profile becomes.