Research in the area of soot diagnostics has been ongoing at the division since the late 80's. The last last decade focus has been on the development and application of the laser-induced incandescence (LII) technique, which can be used for measurements of particle size and soot volume fractions in combustion environments.

Soot is small particles built primarily from carbon. The particles are produced in combustion processes where the oxidant (often air) concentration is too low compared to the fuel concentration in order to completely combust the fuel in the reaction zone. This means that the product gases, which during complete combustion consists of water and carbon dioxide, will contain large fractions of unburnt hydrocarbons which in the high-temperature environment will react and result in larger ring-shaped hydrocarbons, so called aromatic hydrocarbons. Later on in the process larger solid particles, so called soot particles, will form. A schematic view of the soot formation process is given in Fig. 1.

Laser-induced incandescence (LII) is a technique based on detection of light emitted from heavily heated soot particles. Soot absorbs radiation very effectively and behaves similar to black body radiators. This is the reason why soot is very common as pigment. More or less everything black has soot-based additives, like for instance black plastic material or the toner for laser printers. A material that absorbs effectively also emits effectively. This is a prerequisite for all optical detection of soot.

The principle of LII is to expose the soot particles to a short energetic laser pulse in order to heat them to temperatures around 3500 °C. This result in an increased light emission, and a short light pulse can be detected from the measurement volume. The absolute strength of this emission is related to the soot volume fraction and when the technique has been calibrated, quantitative soot volume fraction measurements can be carried out with high temporal and spatial resolution.

The LII signal is usually substantially longer than the laser pulse, which typically is ~10 ns long. The reason for this is that the heated soot particles retain their original temperature by heat conduction to the surrounding gas, a process which takes several hundreds of nanoseconds in atmospheric-pressure environments. The heat conduction process is dependent on the area of the particles whereas the absorption of laser radiation is volume-dependent. This area-to-volume relationship makes it possible to derive size-information from the particles by studying the decay time of the LII signal. 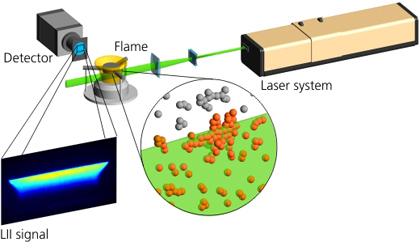 Soot diagnostics using laser-based techniques has a long history at the Division and has included not only LII, but also absorption and scattering techniques. The last decade much effort has been put on the LII technique which is the most promising technique as it can provide high temporal and spatial resolution and good signal yield.

Much effort has been put on the development of a theoretical model for the interaction between laser light and soot particles, a model that has been used in a number of studies. With such a model it is possible to study the influence of several parameters on the LII signal behavior. The model can also be used for evaluating measurement data, primarily primary particle size distributions. Experimentally, a system for 2-color LII has been developed to measure soot particle sizes. This has been used in several studies both in flames and cold soot flows.