Light detection and ranging (LIDAR) is a well established method for remote range-resolved measurements. The main scientific use of the technique is for characterization of the earth’s atmosphere.  Basically, a laser beam, usually from a pulsed laser, is directed towards the region of interest, where it interacts with the medium under investigation. By detecting the backscattered radiation, the laser/matter interaction may be analyzed and some properties of the medium penetrated by the laser beam can be determined. Figure 1 illustrates the basic principle of LIDAR. 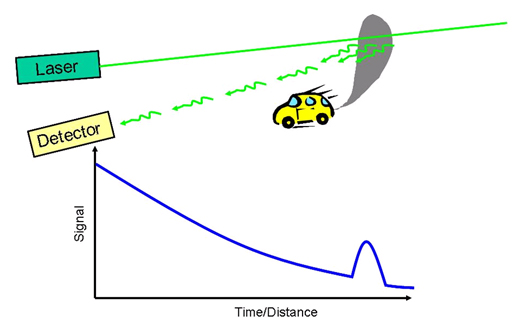 In an ongoing research project, a ps-LIDAR system using laser pulses of typically 30 ps duration, from a mode-locked Nd:YAG laser, is developed. Using such short pulses, a range resolution of 5 mm is achievable. With a basic experimental setup, collecting the backscattered radiation using a lens system, the method has been characterized and successfully demonstrated for thermometry and species concentration measurements. Taking advantage of not only the temporal axis of the streak camera (which is coverted to a spatial axis along the direction of the propagating laser beam) but also its spatial axis (i.e. the axis orthogonal to the laser beam direction), it is possible to perform 2-dimensional LIDAR-imaging for a single laser pulse. Figure 2 shows a result from 2D-Rayleigh thermometry in a premixed flat flame of a McKenna burner using ps-LIDAR. 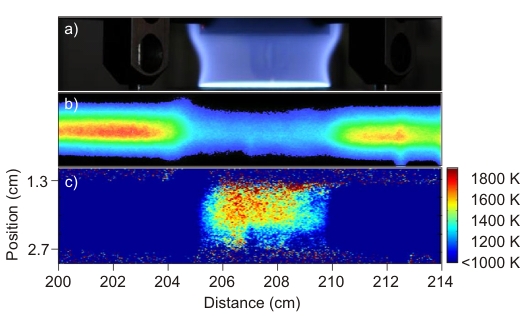 Figure 2. Result of two-dimensional ps-LIDAR Rayleigh thermometry in a flat premixed flame. (a) Photography of the flame taken from the side. (b) ps-LIDAR Rayleigh scattering signal. The imaged plane is oriented orthogonal to the plane imaged in (a) further oriented parallel with the surface of the burner. (c) Evaluated 2D temperature plot. The lower axis corresponds to distance from the LIDAR receiver while the vertical axis corresponds to spatial position along the axis perpendicular to the laser beam direction (2.0 cm corresponds to the center of the flame).