Polarization spectroscopy (PS) is one of the simplest four-wave mixing laser-spectroscopic techniques. In spite of its nonlinear nature, the fully resonant enhancement enables the application of PS to detect minor species in harsh environments. PS was first introduced by Wieman and Hänsch [1] as a Doppler-free spectroscopic method, related to saturation spectroscopy but offering a considerably better signal-to-background ratio. In a typical PS setup, as shown in Fig. 1, a strong pump beam and a weak probe beam from a tunable laser, tuned to optical transitions of the target species with a common ground state or excited state, are crossed at the interrogated region (the sample). The optical pumping of the target species by the polarized pump beam produces birefringence and dicroism and induces a detectable polarization change in the weak probe beam. This change can be detected by monitoring the introduced leakage of the weak probe beam through two crossed polarizers. In essence the probe beam should not be able to pass the second polarizer if it the species in the sample effectively changes the characteristics of the probe beam. In short, PS is an absorption-based technique but with null background. 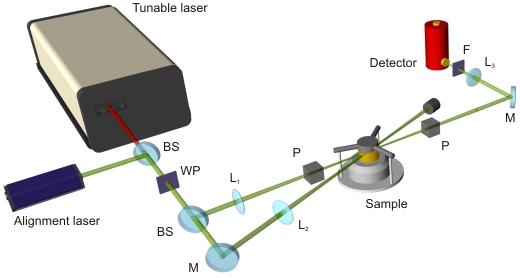 PS was first applied to a flame measurement by Tong et al. [2] detecting sodium and barium atoms. PS detection of a minor combustion species, the OH radical, was first presented by Nyholm et al. [3]. Since then, PS has been applied to flame detection of many combustion related minor species, e.g. C2, NH, CH and NO.

Probing molecular ro-vibrational transitions by IR excitation schemes has always been attractive to the combustion diagnostics community, as many important molecules and radicals such as CO2, H2O and most hydrocarbons pose no conveniently accessible electronic transitions in the UV/visible spectral range but have strong absorption in the mid-infrared spectral range (See also IR spectroscopy). Due to the relative simplicity in experimental setup (compared with other 4-wave mixing techniques) and its absorption-based nature, the technique was recognized at our Division a few years ago as an important tool to achieve spatially resolved measurements in the mid-infrared spectral range, so-called IRPS. Investigation of the applicability of IRPS to the detection of water, CO2 and different hydrocarbons in both non-reactive flow and in flames have been made. Shown in Fig. 2 is an example of an IRPS excitation-scan spectrum of CH4 and C2H6, taken in a gas mixture with a small amount of methane and ethane mixed with argon at atmospheric pressure [4]. One can conclude from the spectrum that species-specified detection of some hydrocarbon molecules are achievable by IRPS with high sensitivity.

In the further developing of the IRPS technique, efforts are made to improve the detection sensitivity and to seek for proper quantitative interpretation of the PS signals. Research interest with IRPS also includes the detection of other interesting IR-active molecules e.g. HF, HCl and HCN for the application of waste destruction, bio-fuel and fire safety.